I might just have to preach on Psalm 75 for Thanksgiving Day some year. Everything is there - reminder that all you have is from God lest we should boast (cf Deuteronomy 8), salvation (for Christ drained the cup), eternal life (how can we declare it forever if we do not live forever?). And it all starts off with, "We give thanks to you, O God; we give thanks, for Your name is near. We recount Your wondrous deeds."
Posted by Rev. James Leistico at 7:29 AM No comments:

It's getting a little weird seeing the connections between anniversaries in my life and TDP readings. For instance, on my wedding anniversary, I'm warned not to be like David in his indiscretion with Uriah's wife. At least yesterday's connection was much more positive, what with Matthew 28 being the reading and November 20 being the day years ago that the Church obeyed our Lord's command, and made me to be a disciple in the Name of the Trinity by water and the Word. I read Psalm 118 twice through, once with my Baptismal anniversary in mind and once through the lens of Christ's resurrection. In either case, "This is the gate of the LORD; the righteous shall enter through it" (v. 20).

btw, I already loved the hymn "God's Own Child, I Gladly Say It" (LSB 594) - but now even more now that I've seen it as an expansion of "It works forgiveness of sins, rescues from death and the devil, and gives eternal life to all who believe this..." (Luther's Small Catechism)
Posted by Rev. James Leistico at 10:08 AM No comments:

at first, before reading Elizabeth's biography, I thought today's writing was connected to Joseph of Arimathea's caring for our Lord's dead body - and that we should have a "holy envy" if you will, that stirs us up to care for the needy in our day in Christ's name.
Pastor Weedon has here a summary of the Writing, and the bio of St. Elizabeth (whose name graces one of our local hospitals). And while you're at it, check out what he wrote about yesterday's OT reading here.
Posted by Rev. James Leistico at 12:50 PM No comments:

What if the term "Christmas and Easter Christians" was actually a good thing? That is, it referred to those who could not think of our Savior's birth without thinking of His death and resurrection - for there could not be the latter without the former. That's what today's TDP readings have brought together - a passage from Jeremiah that provoked thoughts of Christmas, with its reference to the Son of David who was to come and reign as King (not to mention shepherds in the fields with their flocks), and Matthew's passage leading to our Lord's crucifixion. The writing from Walther, while more directly related to the NT writing, certainly can be applied to the OT reading, with the theme of places of curses becoming the places of blessing.
Pastor Weedon spotted another important connection between the readings.
Posted by Rev. James Leistico at 12:53 PM 2 comments:

"What shall I render to the Lord for all His benefits to me? I will lift up the cup of salvation and call on the name of the Lord" (Psalm 116:12-13).
hmmm... this thanksgiving sounds so different from what the world would expect or instruct. yes, verse 14 goes on to speak of what would be expected, thanking expressed with paying vows, living in service, etc. But this first section is not expected - thanking by receiving more gifts from the One you are thankful to. Seems like I heard somewhere that the highest form of worship is faith - trust in the God who saves.
a very beloved section of the psalms, and highly appropriate for the anniversary of my nativity, as my friend Mark Schlaamann calls it. Starck uses the verse for his birthday devotion. (HT: Weedon)
Posted by Rev. James Leistico at 10:06 AM 1 comment: 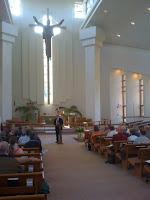 ...it's my blog and I can write what I want!
anyway, for those on the 3 year LSB readings, if you have time go read this paper by John Kleinig on this Sunday's Epistle text from Hebrews 10.
If you are on the 1 year historic, go read it anyway.
if you don't have time, make time.
Posted by Rev. James Leistico at 10:05 PM 1 comment:

a favorite of mine. When the sanctuary was being redecorated, I got the words of verse 8 painted above the doors to be seen as people leave church.
But this evening, another promise stands out. It is a joy to know that as I slumber and sleep, the One who keeps me will not. The Lord grant you rest this evening and peace at the last.
Posted by Rev. James Leistico at 10:00 PM No comments:

A Message for Brothers in Amt

This is what I preached at Winkel on Tuesday based on the November 3 TDP reading from Matthew 22 (a bit late, but I've been one busy boy - four different sermons in five days: Sunday, Winkel, HS chapel, and a funeral yesterday)

Whether you follow Lutheran Service Book’s Daily Lectionary or not, you know the parable from Matthew 21 assigned for yesterday, the parable of the tenants who killed the vineyard owner’s son – and the chief priests and Pharisees knew Jesus was talking about them.

In today’s parable, the Son of the King is alive again, with the wedding feast all prepared by His Father. And you know that Jesus is talking about you. It is pretty easy to put yourself in the sandals of the King’s servants. God sends you out to call the world He has invited, saying that the Lamb has been slaughtered to save them from their sin. Everything is ready for them to be in the presence of God and not die, so come to the Divine Service. But the inactives of your congregation and those lost in your community have not come. They pay no attention to your encouragements and warnings. Too engulfed in the busy-ness of life in this world, they have earned the right to be lazy on Sunday morning. Besides, God is alright with them and they are alright with God – or whatever other reasons they give for not being in church. Yes, dear brother, though you have not yet been seized and killed by those the King has invited to His Son’s wedding feast, it is easy for you to see your role in this parable as one of the King’s servants.

But there is a problem with that. Not that you are not the King’s messenger servant – you are. Rather, the uncomfortable truth is that we spend time as those who are invited to the feast but will not come. And not just in the past, where you might have been like me and spent some time away from the church. But even now, God sends His servants to us – whether they be a fellow pastor or a layperson – and we find ways to pay no attention to them. Can’t you see how busy I am with being a pastor here?

When I was in Seminary, my pastor told me about his first day in Hom 1. The professor told his class, “You have enjoyed your last sermon.” You know what he meant. You know the struggle to listen to a sermon – or even just to listen to the Scriptures. When you are not busy working, taking mental notes of what you want to say in your preaching, you are critiquing the preacher, thinking to yourself that you would say what he said better, or not said it at all. Either way, you keep yourself from resting in the green pastures of God’s Word of grace and mercy.

The difference between the inactives, the lost in our communities, and you and me is only a matter of degrees. We share the same spirit that wants to serve ourselves at the buffet of spirituality. We face the same temptations to self-medicate our wounds, to deny our sins are sins through justifying excuses, and we have the same opportunities to use worldly amusements like the internet and alcohol to numb ourselves to the pain. When we become full of ourselves, we cannot be interested in the feast of fellowship with God. Even when we have noticed the hunger pangs for righteousness, we have rejected the invitation, for instance, when you and I complain about the way that servant laid out before us the Bread of Heaven and the fruits of the Spirit. Their presentation was not good enough. A servant comes to warn us of the shameful nakedness our sin is causing, and we refuse to listen to one person simply because of who they are, while we would have listened if a servant we liked better had warned us in the exact same way.

How terrible would it be if, after you preached to others the invitation to the feast, you yourself would be disqualified, bound and cast out into the outer darkness where there is weeping and gnashing of teeth? God does not want you speechless, for this is the Lord who opens our lips so that our mouths might declare His praise with pure voices forever. So that you will not be naked in shame, but be found forever wearing white robes, with a palm of victory in your hand, put yourself in the sandals of the good and the bad. For our Lord does not give up in sending His Suffering Servant to you, the Lamb of God who takes away the sin of the world as His mouth is closed in death – but then re-opened on Easter to declare His “Peace be with you”.

On a recent “CSI”, the new leader of the department was struggling. She had received a bad review from a former worker who complained she was a bad leader and because of her the team had no unity. When she went to another police officer with her doubts about her abilities, he told her that the previous leader, Grissom, “had one thing you don’t have – He had you.” Things went better after she appointed an assistant leader to her team, even as she had assisted Grissom.

Dear brothers, do your people have one thing you don’t have? It should not be that way. God provides plenty of men who could be your pastor. With modern technology, you can easily find a brother who regularly posts audio recordings of his sermons on the internet and listen to them. Listen to them not for your own sermon fodder, but so that you may preach the faith because faith has first come to you by hearing Christ’s Word.

But more than that, you need your own pastor who will speak God’s word to you as an individual and who will speak to God for you, praying for you and your family at the hospital, or in whatever other troubles or joys you find yourself in. You need a pastor who will show you how you have rejected God’s invitation to feast upon His love. And then you need all the more your pastor to forgive all your sin in the name of the Father and of the Son and of the Holy Spirit. And what you need, God will provide. Amen.