The winding road that God brings us along can be strange and unexpected.  Last week I found the Christmas card that Aaron and Heidi sent to us last year.  “It was so great to see all of you this summer!  God’s richest blessings to you all in this coming year!”  Little did any of us know that we would see each other again down at their place in Tennessee last June, and now again, here, on this day of great joy for him, and for you – the dear saints of Trinity.
I do not remember when I met Aaron, maybe he does.  But I know we became friends very quickly as we started at seminary together 19 years ago, with just a few stairs between our rooms.  Great enough friends that within four months, I was getting up early to travel from Ft. Wayne to Wisconsin for his wedding to Heidi.  I vividly remember Josiah’s baptism at the seminary’s chapel during our second year.  And the night in our fourth year when Aaron and Heidi showed great hospitality to my wife and me, inviting us over to their place for supper.  So it was quite an honor when your new pastor asked me to preach this afternoon.
But then after I got off the phone, reality hit me like a ton of bricks as I realized that writing 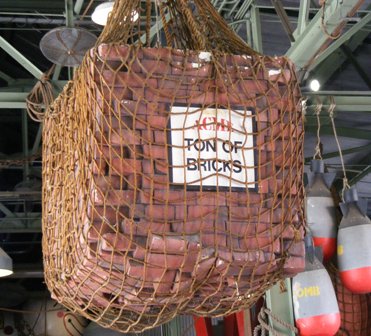 this sermon would be hard work!  So many things I could say – too many even!  (And neither you nor I want to be here for a sermon THAT long!)  Recently one of my confirmation kids told that her problem with church is that she has to sit and be so quiet.  She loves to talk, and figured that I loved church services because I get to talk all the time!  Little did she know that when my pastor first asked me to consider being a pastor, I wanted to say, “ARE YOU NUTS?” – except that you don’t ask your pastor if he is nuts!  The idea of it scared me silly since I was terrified of having to say things in front of a crowd of people.

If it were as simple as just saying whatever I want to say off the top of my head, I would feel a lot less pressure.  However, God did not make me to be a pastor so I could do that.  He gave me the task of just saying whatever He wants, of teaching His ways, of rebuking sin and forgiving it in the name of Jesus Christ.  That same Lord of the Church has created faith in the hearts of people at St. Peter’s and St. John’s in Evansville and Ruma (ironically, the congregation where Pastor Schrader comes from.)  In their faith, these people called me out of the seminary because they want to be taught God’s Word – even as you, dear brothers and sisters, by this church service vow to God that you want my friend to teach the same Word to you and for you.
I feel the pressure of preaching to you today, preparing you as congregation and pastor to walk together in this new relationship with Christ.  Yet I recognize that just like we had no idea the blessings that God had in store for us behind last year’s Christmas card, likewise we have no ideas the blessings and crosses the Lord has in store for the future of your congregation.
I was ordained in June of 2001 and within a few months our nation suffered the unimaginable

horror of September 11th.  Among other thoughts that went through my head that morning was that the seminary never prepared me for a day like that.  Except that they did!  Our professors taught us to preach Christ and Him crucified, in good times and bad - even in the dark valleys of the shadow of death.
Did the Disciples feel like Jesus never prepared them for a day like the weekend of Good Friday?  Except that Christ did prepare them, telling them multiple times that He would lay down His life as He was lifted up on the Cross for our salvation, and then rise again on the third day.  As we heard in this afternoon’s Gospel text, He changed their hearts and their futures in an instant by declaring “Peace to you.”  Even though they were still sinners, still weak and afraid, still would make mistakes in the future, God loved them.  Their fears and doubts were not so great as God’s grace, their sin not so deep as His love.  There was no condemnation left against them in Christ Jesus who stood before them alive after death.  Could anything have prepared them for that moment? 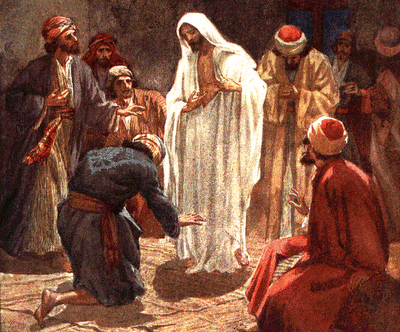 Posted by Rev. James Leistico at 12:38 PM No comments: