June 27 - Commemoration of Cyril of Alexandria

Cover via Amazon
I first became aware of Cyril... well, probably in Dr. Weinrich's Early Church class, but I guess I forgot him after the exam was over. While doing sermon prep in Year C about 4 years ago, I noticed that Cyril kept having these great quotes in the Ancient Christian Commentary on Luke. So I did some research and got a great bargain on his Lukan commentary. The way he pulls in the rest of Scripture when commenting on Luke's writings. WoW. Here's a few links:
Cyril's Commentary on Luke (though it doesn't have the cool icon art that my book does) and John
Commemoration of Cyril of Alexandria by Paul McCain 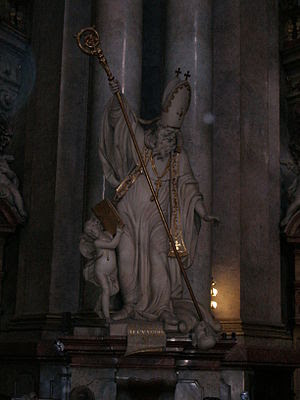 Image via Wikipedia
by Aardvark Alley
Patristic QuoteS of the Day from William Weedon - who will be on Issues, etc this afternoon talking about this saint
And speaking of Issues, etc (which I still haven't won a Blog of the Week yet from them! Stiff competition) - here's what Rick Stuckwisch and Heath Curtis had to say.

Posted by Rev. James Leistico at 11:45 AM No comments: 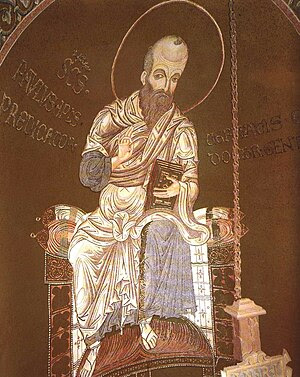 Posted by Rev. James Leistico at 3:18 PM No comments:

June 24 - The Nativity of John - What Luther Says

﻿﻿﻿ HT: Rev. Matt Harrison for this quote some of you may have read yesterday -


Other prophets have also foretold how Christ would come and how He would free the world from sins. But neither Isaiah nor Jeremiah would have been able to say: This is the one whom you must accept. John is the only one whose voice was the first to announce Christ and whose fingers pointed to the person where the forgiveness of sins is actually to be found. No human being had ever had or seen fingers like those of John, with which he pointed to the Lamb of God. Therefore, when we are oppressed by sin, or terrified by the Devil or by Death, what we need to do is to look at the mouth and fingers of the preacher, who will give us the correct teaching and show us how to come to the forgiveness of our sins and how to make our peace with God. This is the joy that the whole world, not just Elizabeth and Zechariah, should have in John. 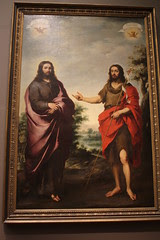 Martin Luther in Luther’s Breviary: A Meditation for Each Day of the Year (Wartburg Verlag 2007), p. 192

Posted by Rev. James Leistico at 4:56 AM No comments:

The interactive workings of the mind, heart and Scripture is fascinating.
About like seed planted that suddenly appears above ground,
as Someone once said...

I've noticed a lot of movies and tv shows I watch explore the question, "Who are you?" - the most recent being Kung Fu Panda 2.  Though I had seen such movies as Star Wars deal with the question, I was not explicitly aware of it until Babylon 5.  The driving story arch across the first seasons had to do with two sets of aliens guiding and using humans and other alien races in their conflict with each other.  One asked "Who are you?"  The other asked, "What do you want?"  The results were disastrous (genocide) when the second question was answered before the first.

Image via Wikipedia
This morning these thoughts all came together for me with the John 18 reading from Monday.  For Adam and Eve's forgetting they were God's creatures, for David's forgetting neglecting his duties as King when it came to Uriah and his wife,

for the way you forgot
you are the child of God
when pursuing what your sin wanted
earlier today -
turning a deaf ear to the Truth,
and for every time in between,
Jesus remembers who He is as King under God when He speaks to Pilate (John 18:33-37) so that He would be our perfect substitute in the image of God and man.


Below is the sermon I preached for Trinity Sunday, which was influenced by my viewing of Kung Fu Panda 2, based on what the Sober Peasant preached some years back.

Posted by Rev. James Leistico at 11:20 AM No comments:

I was pruning a bush in our front yard a few weeks back, and I noticed a vine precious to me was clinging to this bush.  An observer might wonder why I didn't trim both bushes equally.
And so it is with our Christian life when the Father prunes us, and we wonder why He prunes here and not there, this part of my life and not that, me and not her...  Perhaps it is because a third person needs that bit not cut off for support.
If I prune as I think is best,

though I am barely a novice gardener,
and really do not know what I am doing
and do what I do for my own enjoyment of how it looks to me,
how much more does Our Father prune
as He knows is best?

For He is the omniscient Creator
who always works things together not for His good, but for the good of those who love Him.

Image by micmol  via Flickr
Apparently I was not the only one to see a beautiful connection between today's Feast and the readings assigned in TDP - so did the Hymnody editor (I assume that was Rev. Henry Gerike), as we sing from the Pentecost hymn "Come, Holy Ghost, God and Lord" for the Spirit to impart strength to our weakness as He prepares each heart.

O Christ, once we were a people whose hearts were weighed down with dissipation and drunkenness and the cares of this life.  We were doomed for the Day of Judgment to spring upon us like a trap.  But on this day in the Church we remember how You work to prepare us for that Day as You send forth Your Spirit - not only into the hearts of your preachers, but also into the hearts of Your hearers through Holy Baptism for the forgiveness of their sins.  We praise you for repeating in our lives this great miracle of faith, and now pray for our enemies and all who do not believe in You, so that they with us would "have strength to escape all these things that are going to take place, and to stand before the Son of Man" (Luke 21:36)

Posted by Rev. James Leistico at 6:26 AM No comments: 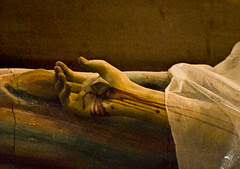 Image by larry&flo via Flickr
Never ceases to amaze me how appropriate passages can be for the day.  Just before our pre-VBS staff meeting, I realized I didn't have a devotion ready!  So I quickly grabbed TDP.  Wow.  Psalm 111 went so well! Not just in speaking of studying and praising and remembering the Lord's deeds.  But also consider the reference to the work of His hands (v 7).  Ordinarily we might take this as Creation.  But when I read it 2 minutes before the meeting, my mind went immediately to the hands that were nailed to the Cross, that held fish to show He was not a ghost, that were shown to remove Thomas' disbelief, and hands that were raised in blessing upon the disciples when Christ ascended.  A question entered my head: "Is this stretching the meaning of the work of His hands?"  And yet, consider how redemption is the theme of the next sentence.

What do you think?

Image via Wikipedia
conversation the other night -

T: "Will we see Him tomorrow?"